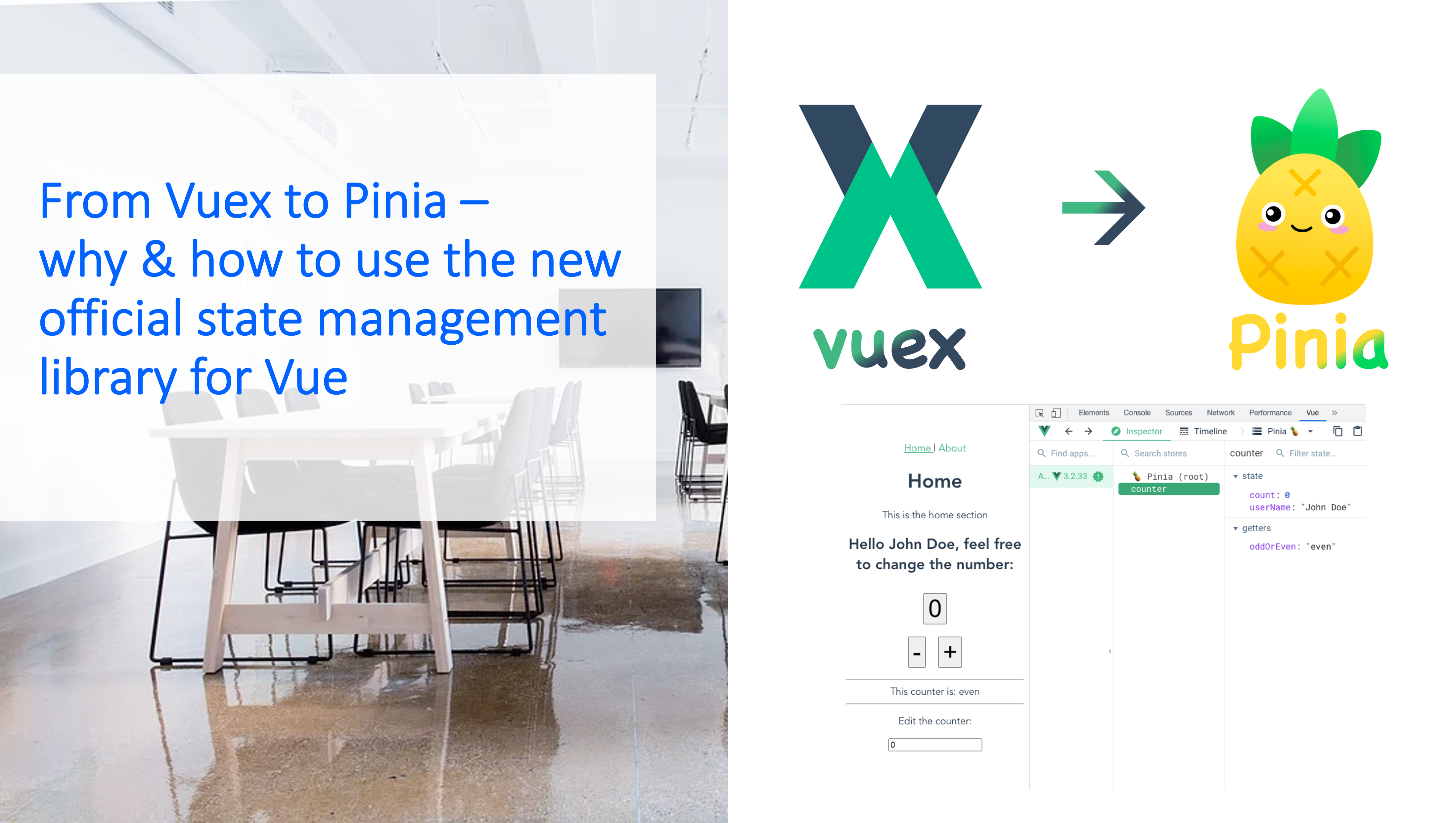 What is state management?

Applications often need access to the same data even across different components. Without global state management we always have to emit data up via events from child to parent components and passing data down as props from parent to child components. You can probably already imagine that with a growing size of the application and many components where the data is needed this quickly gets unmaintainable. That’s where a state management solution like Pinia is required. Instead of each component keeping track of its own state and passing that state around. Pinia acts as a global store, storing state in a single place and passing it out to components, as they request it, as well as providing mechanisms to components to mutate it.

Apart from the above mentioned advantages of global state management like bigger applications still being maintainable, Pinia – according to the official Pinia site – offers some advantages for instance compared to Vuex:

How to use Pinia?

You can get started by installing Pinia with your favourite package manager:

Create a Pinia instance (the root store) and pass it to the app as a plugin (this could be your main.js file):

A Store (like Pinia) hosts global state, it’s a bit like a component that is always there and that everybody can read off and write to, it contains data that can be accessed throughout your application, for instance user information that is displayed in the navbar, as well as data that needs to be preserved through pages, like a very complicated multi-step form.

The Pinia Store has 3 concepts:

Now let’s build an application – which is based on the following YouTube Video in the channel Make Apps with Danny, which I can highly recommend – and if you already followed along with the Vue router tutorial, we can perfectly use this to include state management with Pinia into our application. We installed Pinia and did some changes to main.js as you can see above. Now let’s create a new file called counter.js and place it into a directory called stores right next to the router directory. The counter.js file should contain the following state, getters and two actions:

Inside of our components directory, let’s create a new component called CounterComponent.vue, which we can reuse. We have to import our store to call the actions and show the state. It should contain the following code:

Now let’s update our views in the views directory. We can start with HomeView.vue and put in the following code, make sure to include the setup keyword in the script tag, to indicate that we are working with the composition API:

Now we only have to change AboutView.vue as well:

Now we can start the app by running npm run serve and then we can change the count. As you can see the state doesn’t change if you go from the Home to the About section. To further see what’s going on with our state you can install the vue devtools, just Google the term and install the browser extension, for instance for Google Chrome, then instead of going to the console you can go to Vue, select the Inspector and then Pinia, now you will see your state and how it updates each time you change the count. Feel free to fork the source code on Github.